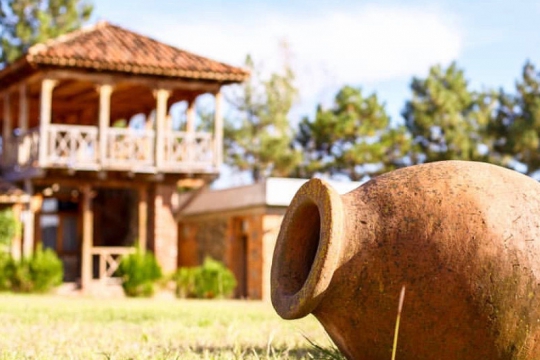 Our Kakheti tour offers a day in one of the most beautiful regions in Georgia. The very best wines come from Kakheti. Almost three-quarters of the county's wine grapes are grown here. Archaological findings have suggested that wine has been produced here for several thousand years. Almost every village in Kaketi is well known for its own sort of wine, such as Kindzmarauli, Akhasheni, Teliani, Mukuzani. Wines are named after the places where they are produced.

Trip to Kakheti includes several tourist destination, such as Monastery of St. Nino in Bodbe, Sighnaghi – City of Love. On our way we will taste georgian bread called puri. Puri is traditionally baked in a deep circular clay oven called tone. During the harvest season, we will also visit one of the biggest wine factories in Khakheti, where you can taste and buy wine.

Excursion is accompanied with the guide in English and Russian, and provides best value for families, friends, couples and solo travellers.

Tickets can be booked online with promotions - here or at our Office  (Meidan sq.)