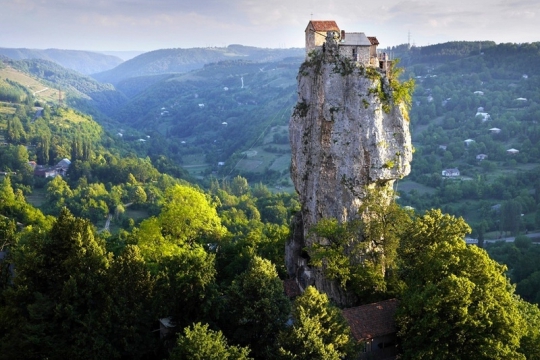 At the request of our guests we created a package of excursions of best-orderers in which the most interesting and popular sights of Georgia were united!

May holidays in Georgia - this is a good opportunity to organize for themselves and loved ones an extraordinary vacation. You can taste magnificent Georgian wines and cognacs, pleasant shopping and unsurpassed cuisine will add to your pleasant impressions your rest, and the cultural heritage and a huge number of historical monuments of world heritage. All this diversity attracts tourists from all over the world who come here for a first-class holiday.

For the package tour:

Do you plan your holiday in advance
Guaranteed passanger places on the tour (which is important during the holidays!)
Package tour is cheaper - you save

Day 1 of the tour for May holidays

1- Excursion on a double-decker bus with a cabriolet is a great time driving which includes all the major tourist attractions, including the old city and fortress walls of the wall, the Maidan Square, the sulfur baths area, the Mtkvari River, the Metekhi walls, the Dry Bridge, the Flea Market, , Peace Bridge, Freedom Square, Rustaveli Avenue, Heroes Square, Agmashenebeli Avenue and much more!

Tour of Tbilisi on the excursion bus is complemented by a unique view from the second floor of a double-decker bus of a cabriolet. The tour is accompanied by an audio guide, the language of comments you can choose at your request - English, Russian, Ukrainian and more.

A bus tour is one of the best ways to walk around Tbilisi and provides the best price-for a family, friends, couples and individual travelers.

2- Excursion tour to the ancient capital of Georgia Mtskheta.

Tour to Mtskheta is an excursion that will allow you to escape from the city and visit the ancient city, the first capital of Georgia, Mtskheta, within just a few hours. During the excursion you can enjoy a panoramic view of the air mountains around the Jvari Monastery, see the unique natural phenomenon of the merging of the two rivers Aragvi and Kura and transfer to the beginning of the century by visiting the Svetitskhoveli Cathedral and the Samtavro Temple.

The tour is accompanied by a live guide in English and Russian, which provides the best value for the family, friends, couples and individual travelers.

The city of Mtskheta, is one of the oldest cities of Georgia near Tbilisi.
Jvari is a Georgian Orthodox monastery of the 6th century near Mtskheta (a UNESCO World Heritage site).
Svetitskhoveli was built in the 11th century, although it is even older, from the beginning of the 4th century and is surrounded by a number of legends, associated primarily with early Christian traditions.
Samtavro is a monastery complex of the 11th century, where the first Christian King Miriani and his wife Nana are buried.
Wine cellar with traditional authentic architecture and tasting of Georgian wine, tasting is held according to ancient traditions from Kvevri vessels, tasting is free!

In the tour we will visit:

If you did not manage to buy a tour on the site, you can order the package in our office (Kote Abkhazia 44, Meidan square).

We wish you a pleasant stay in Georgia.

Thank you and enjoy the trip!