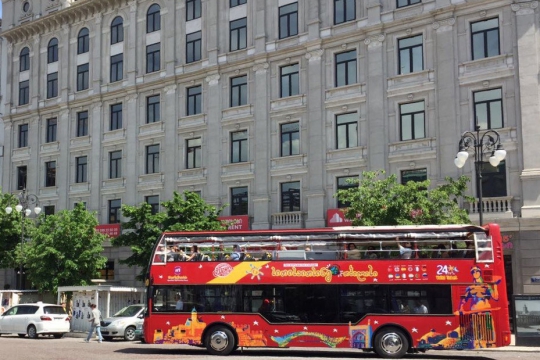 Super Ticket for Sightseeing Tbilisi trips is one of the best ways to see Tbilisi, Mtsketa – the old capital of Georgia, to visit Turtle Lake, to see Sventian Towers in Ethnographic Museum and have a night Tbilisi tour by boat.

Mtskheta day trip offers you to escape the city and visit the oldest city of Georgia within just few hours. During the tour, you can enjoy panoramic aerial views of mountains around Jvari Monastery, observe the confluence of Aragvi and Mtkvari rivers, or have a time trip back to early centuries in the area of Svetitskhoveli cathedral and Samtavro church, at the end of the tour you will taste Georgian wine. Excursion is accompanied with guide in English and Russian.

The boat trip covers some of the most popular tourist attractions, including Mtkvari river old town surroundings, Metekhi crag with traditional architecture houses on top, sulphur bath district, Rike park, Peace bridge, House of Justice, Gorgasali alley and more! The trip is one of a kind in Tbilisi and provides best value for families, friends, couples and solo travellers.

You save up to 18$ by combining red, blue and green line

We are proud representatives of Worldwide Sightseeing Company, delivering similar services to visitors in almost 100 top destinations globally, such as New York, London, Paris, Dubai and of course Tbilisi!

A few quick facts about Mtskheta:

Tickets can be booked online with promotions - here, at our office (Meidan sq.), or at the boat stop. Please make sure to check the timetable with our office for departure times. See a quick MAP for the detailed route or download a full printable PDF map here. We wish you a pleasant stay in Tbilisi. Thank you and enjoy your trip!